School uniform’s in for grown-ups this summer

School uniform? On fully grown women? Bear with us. The constituent elements of classroom dress were all over the catwalks for spring/summer 2015: glossy suede trenchcoats at Burberry; kilts at Joseph, cricket jumpers at Preen and socks at Jil Sander – and gingham and tartan everywhere.

That’s not a big stretch for many of us, who never quite shake off our dependency on a daily uniform of sorts. The catwalk incarnations are particularly lustworthy, But being innately frugal types we wanted to see how far we could replicate the catwalk version by sourcing the real thing. Cast from your mind those memories of frumpy, lumpy jumpers and ill-fitting pinafores, originally purchased in huge sizes by thrifty mothers who then regretted their economy when we insisted on wearing them until they had reached micro length. Forget the “brown coat, brown hat, orange ribbon, and a brown tunic underneath with an orange belt” of Malory Towers; the yellow and purple badge of the Grange Hill uniform.

Instead, evaluate items on their own merits. Which is how we found ourselves in the John Lewis school uniform department cooing over Marni-esque ribbed socks and Girl Guide neck-ties (very Miu Miu pre-fall). Admittedly, there is a fine art to wearing school uniform and making it look as though you have dressed with grown-up resourcefulness rather than nostalgic desperation. Exercise restraint: more than one item will make you look like mutton dressed as Milly Molly Mandy. Think about sizing. If you’re wearing a pleated skirt, keep it long and loose; if you’re tempted by a cricket jumper, wear it oversized and slouchy. Steer clear of Mary Janes and satchel bags, and keep a critical eye on the cut because although fabrics in the school department are built to last, shapes can be a bit too utilitarian. Here’s our report on the class of ’15. 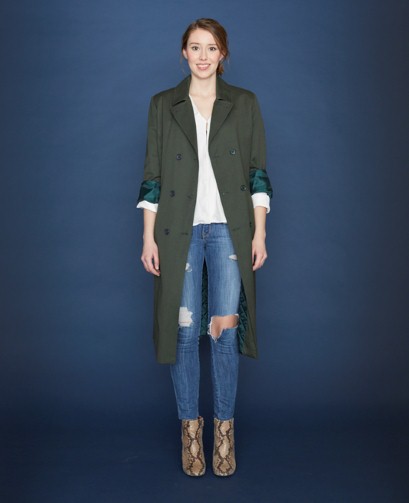 ELLIE PITHERS
When I was a lanky adolescent, I found my uniform quite soothing. A neat gingham shirt, a bottle green pinafore, an itchy V‑neck jumper, a blazer with a crest of daisies and a gabardine proudly decorated with pins represented order and routine. I wasn’t so keen on the bottle-green wool tights. But everything else was reassuring in its promise of conformity. Perhaps that’s why I now routinely gravitate to pleated wool skirts in navy and grey, sober-coloured blazers, cricket jumpers, shiny loafers and knee-length socks. And why, when faced with a fashion cupboard full of school uniforms, I picked this overcoat – nigh on identical to the one I wore at my all-girls school in north-west London. It has a detachable hood, which I hastily removed for fear of looking too Enid Blyton, but paired with jeans and heeled boots, I think it looks quite understated. Or perhaps it’s further evidence of a deep-seated librarian complex.